Third world countries offer charm and personality that attract the curious and surprise the intrepid traveler. Myanmar is no exception. 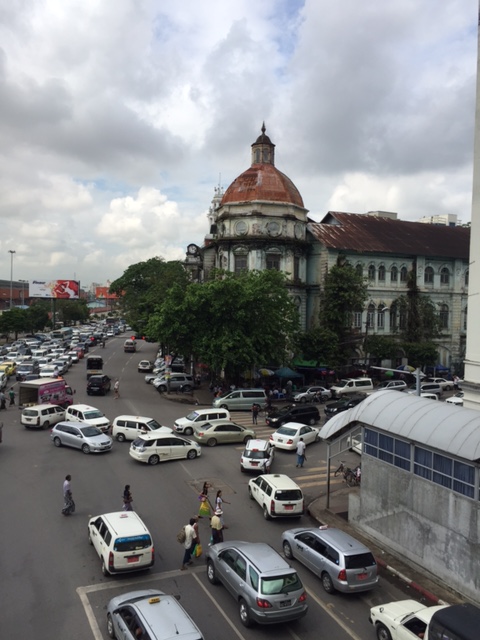 The capital city, Yangon (formerly known as Rangoon), bustles with activity and energy as cars barely move with multiple non-lanes of traffic and pedestrians slink between motorcycles, trucks, oxcarts, bicycles, mini buses, and other pedestrians, all a while the smells of street food coat the air. It is southeast Asia at its norm, I think. Yet, the colors and clothing set it apart in a very special and polite way.  There is no road rage, though there is constant sounding of horns. Everyone is tolerant of the car, and other modes of transportation, snuggling into a space and they give way, kindly. Is it Buddha’s influence? 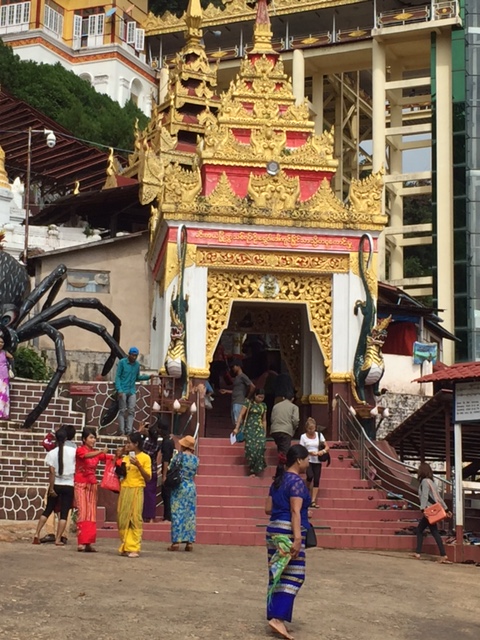 Beautiful colors and patterns of clothing

There are hundreds and hundreds of pagodas, temples, stupas, monasteries and religious sites. Men and women wear a long “skirt” type garment called a longy in all sorts of amazing colors and patterns. The women wear very attractive blouses or jackets with theirs. Even when doing laundry or carrying things to the markets, you will see them dressed this way. The people are always well dressed, baring no legs or shoulders, since they are not permitted in the places of worship.

I learned that the worship of Buddha is more as a teacher, not as a god, leading them to follow along the same moral convictions as Christianity. Each person is responsible for his or her own behavior.  I was amazed to see tree shapes holding money as donations to Buddha sitting on the streets overnight with no one taking any of the money. When doing wrong, they make up for their mistake by doing something good. Worshiping Buddha is thanking him for his guidance, the good things in life, further understanding of his teachings, etc.

The country is always eager for a festival. Since we were there at the festival of the full moon, November 14th, and the overlapping balloon festival, traffic was the worst I have ever seen anywhere and anytime. Due to a flight cancellation we had to drive from Inle Lake to Mandalay. Usually, this drive was a little over four hours, but it took us over eight, due to the festival traffic. Though an inconvenience, we saw countryside, hills, kids riding on the backs of water buffalo, rice paddies and regions we would have missed had we not had to change flights. We also saw lots of people and all types of vehicles in front of us. Needless to say, the infrastructure is less than minimal. 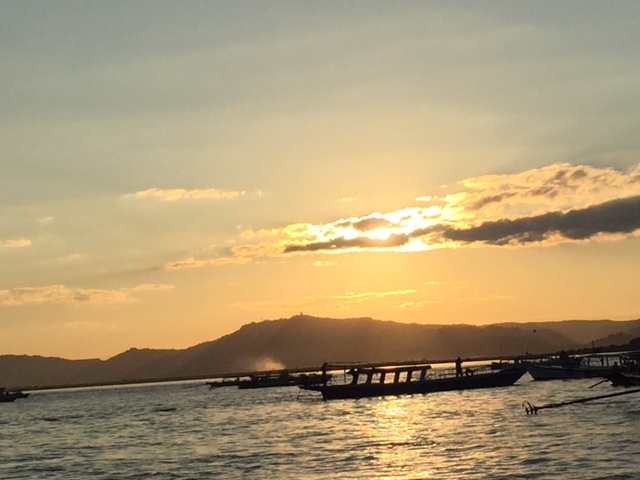 One of many amazing sunsets

We visited Yangon, Inle Lake, Mandalay, Bagan and all possible important sights we could fit into the itinerary. Inle Lake was jam packed with tourists and crowded sites became the norm. No personal space, but in a “kind” way. We climbed 800 steps to the top of the walk to Mt. Popi to see the amazing 360 degree view. We saw sunsets from the water, from the top of an ancient fortress and from the Shwedagon Pagoda. Each was different and special, as were the people, culture, food, color and uniqueness of beautiful Myanmar.

We ate many types of regional cuisine and exotic fruit. Though a dish has the same name in one region, it may be prepared in a totally different way in another and have a completely different taste. I found this out first hand. Not a noodle lover, I found them to be very tasty and prepared in very special ways and they became my favorite.

Myanmar has become a very trendy place to visit and I am so happy I was able to see it now, before they have super highways and McDonalds. We were lucky to have such a superb, easy going and personable guide, Shwee, and driver. Who else would know where to eat off the beaten path, and where the shortcuts were on our full day drive.

Go see this special, warm, friendly and loving land before it is just another destination. Myanmar.