I recently had the opportunity to visit Berlin, Germany, while attending the Virtuoso Symposium event. Berlin is a beautiful, very clean city, with a tremendous amount of green space and an overwhelming amount of history. It’s a very vibrant city with a wealth of shopping, restaurants, and night life. There is a building boom in Berlin and a lot of construction throughout the city, which attests to its growth and strong economy. I think it would appeal to not only the history buff, but the younger crowd, as there is a very cool vibe to the city. It’s a great walking city, plus lots of bikes, and lots of energy. While visiting at the end of April, the weather was ideal! 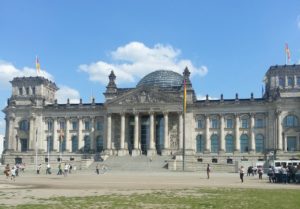 This year is the 25th anniversary of the day the Berlin Wall came down. There will be numerous commemorative events and celebrations in November, so a great time to visit.
At any time, there are tours that explore the history of the wall and it’s probably the most popular tour in the city. Whether you are on a tour or not, there are remnants of the Wall for all to see.

In addition to the Wall, there are many other sights to see. The Brandenburg Gate is probably the most iconic symbol of the city and is right in the most historic area of Berlin. It is at the top of the Unter den Linden, the beautiful boulevard lined with Linden trees, perhaps comparable to the Champs Elysees and the Arc du Triomphe. It’s a lovely walk, but unfortunately filled with construction when I was there. A block from the Gate is the Jewish Holocaust Memorial which takes up a whole city block and well worth seeing. In the other direction is the Reichstag, the famous German Parliament Building. Further down the Unter den Linden there are several historical museums.

For anyone who has an interest in World War II, Berlin is a must. The sights and stories from local tour guides about Hitler and the Nazi regime are fascinating. The location of Hitler’s bunker, the Reichstag, and other sights associated with the Nazi Party and Gestapo are included on many tours dedicated to this era. An excellent exhibition at one of the local museums entitled the Topography of Terror encompasses this historic time as well as that of the Communist control of East Berlin. 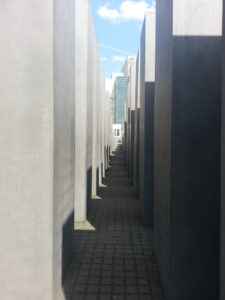 There are numerous museums and galleries throughout the city that would appeal to any visitor. In addition to these there is a wonderful zoo and aquarium. You should definitely include a visit to the historic KaDeWe department store, whether you are a shopper or not.
Plan to have lunch here as there is a whole floor with an endless selection of food stations.

One of the more enchanting aspects of Berlin is its location on the River Spree, which winds through much of the city. There are more bridges in Berlin than in Venice! River cruises are an ideal way to see the city and a very pleasant way to spend an afternoon. We passed many areas along the riverbank with lots of people enjoying the outdoors, and many riverside parks. Many of the cruise tours offer meal service. This is a fun sightseeing tour for individuals and perfect for a group event.

While visiting Berlin, I stayed at the Regent Berlin luxury hotel.  I thought it was a very good location:  two blocks off the Unter den Linden, and a block from the square of the French Dome. The Regent is an easy walk to most of the historic sites, and surrounded by numerous restaurants.  It is a lovely smaller hotel, about 195 rooms, and traditional in style. The rooms are very spacious, with very large bathrooms. I received excellent service.

I highly recommend a visit to Berlin for your next European adventure.